All the details on Philly’s food festivals, parties and pop-ups.

So many food events in Philadelphia, so little time. / Photo courtesy of Kensington Derby & Arts Festival

Despite the harsh temperatures, it is apparently Spring in Philly. That means outdoor food festivals and pop-ups are coming out of hibernation — and so should you. If you’re trying to lure your offspring out of the house, impress a friend, or convince a date you’re worth dating, take them to these 10 amazing festivals, events, and pop-ups happening in Philadelphia this May .

Chef Chance Aines of Tabachoy, a Filipino pop-up project that often performs at Clark Park and breweries across the city, has scheduled a four-course meal at Mural City Cellars on May 11. Each $90 ticket already includes a wine pairing and service charge, plus dishes like a bone-in pork chop, oysters, and soy panna cotta with caramel, latik, and kumquat. There are two seats (one at 5:30pm and the other at 8:00pm) and you can get tickets for both here. 2011 Amber Road, Kensington.

Old City Kitchen opened in March 2022 as a multipurpose space hosting everything from cooking classes and kids’ day camps to private dining and a commercial kitchen for pop-up projects. They have cooking events throughout the month, like a May 5 demo with chef Clara Park, who will be cooking up a whole range of Korean dishes (think KBBQ, various banchan and a crunchy mung bean pancake). If you can’t make it on May 5th, be sure to visit the site to see all of Old City Kitchen’s pasta classes, cupcake decorating sessions, and the rest of May’s cool food events. 218 Market Street, Old Town.

After a two-year hiatus, the Kensington Derby & Arts Festival returns on May 14 from 12pm to 6pm. The event – which sees Derby contestants riding tricked-out bikes through three miles of obstacles including mud and bubbles – supports the East Kensington Neighbors Association support program for local businesses. There will be dozens of artists selling work, as well as food vendors including Pound Cake Heaven, Counsins Maine Lobster, Mom-Mom’s Polish Food Cart, and drinks from Evil Genius, Stateside Vodka, and Loco Pez. By the way, participation in the derby is free of charge. Maybe you should attend the derby? Trenton Avenue from Frankford Avenue to Norris Street, Kensington.

Abby Dahan – the longtime pastry chef at the Parc and mastermind behind The Bake School – opens a fixed-price dinner featuring Moroccan pastries, salatim and larger savory dishes at River Twice in East Passyunk. There are a few options for seating — a seat at the indoor cooking counter ($150 per ticket), indoor table seating ($130), or an outdoor seat (also $130) — as well as a la -carte drinks that can be ordered during dinner. Make your reservation for the May 16 event here. 1601 E Passyunk Avenue, East Passyunk.

Foobooz is hosting an outdoor party at Mann Music Center on May 9th and 10th in collaboration with 10 incredible restaurant teams. Every night there’s a family-style dinner with dishes themed around the question, “How’s Philadelphia tasting right now?” Consider this your only opportunity to enjoy Honeysuckle Provisions grilled lamb, Middle Child Clubhouse prawns and Hardena rendang croquettes all in the same meal to eat. (Except maybe in your dreams). Read all about the chefs’ line-ups and menus here and get your tickets to this fantastic food event before they sell out. 5201 Parkside Avenue, Fairmount Park.

Stroll down 9th Street for the annual Italian Market Festival

The annual Italian Market Festival returns on May 21st and 22nd, with fat fat climbing competitions, street snacks and all. The free open air block party is on the 9th between Wharton and Fitzwater streets from 11am to 6pm. If you’ve never been, expect plenty of good food, face painting, and live bands at the Italian Market’s restaurants and shops. They haven’t released a provider map yet, but stay tuned to their website for more details. 9th Street between Wharton and Fitzwater, Italian Market. 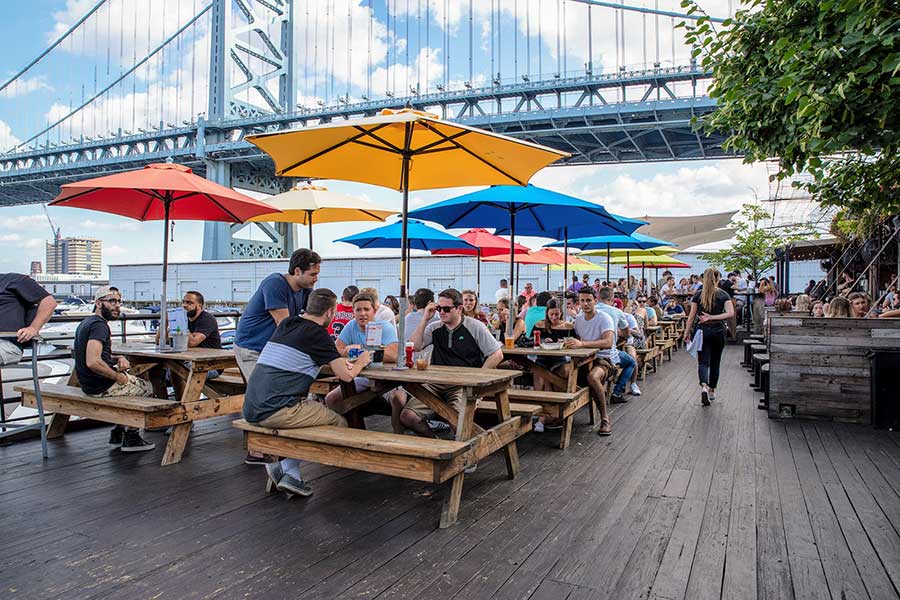 This huge outdoor bar reopened in April with regular live music Wednesday through Sunday. Morgan’s Pier has salsa music on Wednesdays, local bands on Thursdays, DJs on Fridays and Saturdays, and quieter acoustic stuff on Sundays – plus plenty of food and drinks. We’re looking at you, fried cheese curds and frozen margaritas. Just note that there is an $8 fee on Wednesday nights after 8:00 p.m., Thursday after 9:00 p.m., and Friday and Saturday after 10:00 p.m. If you’re worried about a table, you can always reserve a seat in advance here. 221 North Christopher Columbus Boulevard.

Celebrate the return of the Overbrook Night Market

Overbrook Night Market is back for the first time since 2019. This year, the event is being hosted by State Representative Morgan Cephas and Overbook West Neighbors, and you can expect 30 food truck vendors to be lined up on Lancaster Avenue between 61st and 63rd Streets. In addition to the food, there will be a live recording of The Realest Podcast Ever and a few different DJ sets. Stop by Thursday, May 12 between 6:00pm and 10:00pm to check it out. Lancaster Avenue between 61st and 63rd Streets, Overbook.

The team at Irwin’s is teaming up with Drew DiTomo, former chef at Amis, to throw an old-school Italian-American dinner party on May 22nd. It’s a one-night event and reservations fill up super fast. (We get it, Caesar Salad, Eggplant Parmalade, and Meatballs at Irwin’s sounds pretty good.) But you can always join the Resy notification list and wait for a fool to cancel. Or keep an eye on DiTomo’s cooking projects. The Inquirer reported in 2020 that he was working on opening his own spot called Romeo. 800 Mifflin Street, South Philly.