On May 1st, Brown honored his great-grandmother with the latest in his Supper series. It was called A Dinner at 29 and featured the dishes prepared by Castle himself. Brown, who was educated at Johnson & Wales University in Providence, Rhode Island, not far from his birthplace, lovingly prepared each course. The menu included a rice pilaf made from carrots, peppers, and dried fruits called Christmas Rice; the savory plantain puree Mofongo; and saltfish, which is typically salt-cured and rehydrated cod.

“It’s crazy that the day before she died, my great-grandmother talked about what she wanted to eat the next day and that she wanted salted fish,” Brown said. “Mofongo she only did a couple of times for us but it was so good. I remember she smashed her pilon and I thought, ‘What is she doing?’ But I remember eating that mofongo and it was one of the top five things she has ever made.”

Brown, 27, is a veteran of several Atlanta kitchens including Fowling Warehouse and The Pinewood. He has competed on the Food Network show “Alex vs America” ​​(his category was beef). Last year, Atlanta magazine named Heritage the city’s best pop-up. Brown is sous-chef at Southern Belle/Georgia Boy, although he would like to have his own brick-and-mortar restaurant one day. However, that dream is being complicated by a rough economy, a labor shortage, and the ongoing pandemic. But Brown says he’s determined to make it happen.

The first course of A Dinner at 29 was shortbread cookie served with hibiscus scotch bonnet sorbet. (CHRIS HUNT FOR THE ATLANTA JOURNAL Constitution) 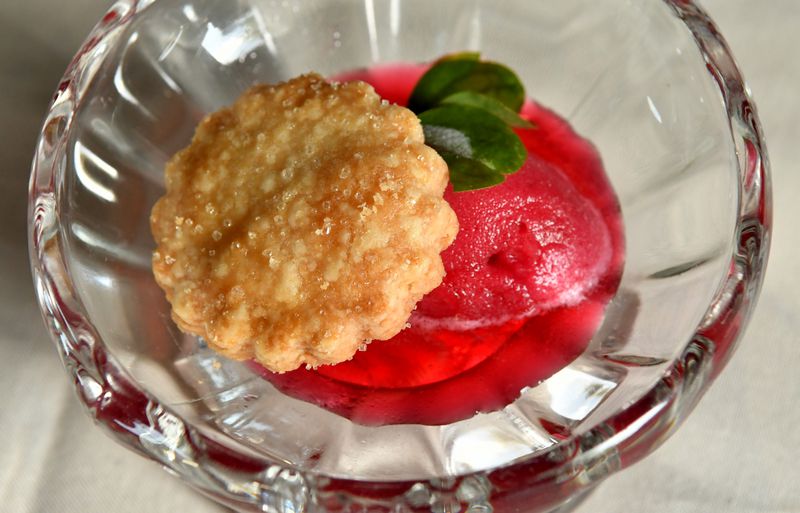 The first course of A Dinner at 29 was shortbread cookie served with hibiscus scotch bonnet sorbet. (CHRIS HUNT FOR THE ATLANTA JOURNAL Constitution)

“The first restaurant will be called Heritage and the second 29 because 29 Bellevue was my great-grandmother’s address.”

Brown left Rhode Island at age 5 when his mother moved the family to Metro Atlanta, but he continued to summer vacation there, playing with cousins ​​and learning cooking lessons from Castle, which he would try at home. As a single working mother, Cotia Banson, Brown’s mother, challenged all three of her children, including the twins’ sister, to cook meals for the family until they left school. Spaghetti with sauce in a glass didn’t work.

“I worked two jobs to take care of them and I made it so they each had to cook a meal one day a week and they couldn’t make burgers and fries,” Banson said. “I wanted a whole meal.”

Brown fell in love with cooking almost immediately, although at the time he wasn’t very good at following his great-grandmother’s recipes. Shortly before graduating from high school, it was clear to him that he wanted to be a chef. On a return trip to Rhode Island, a relative suggested that he apply to Johnson & Wales, known for its culinary program.

On his high school graduation day, Brown learned that he had been admitted to the prestigious university. There he learned the classic technique, but none of the courses involved the type of cooking he grew up with. After graduating, he tried mixing bits of it into the different cuisines he cooked at a variety of restaurants.

“When I was chef de cuisine at Pinewood, we did a lot of Asian-influenced stuff, and I always tried to bring a little bit of Caribbean flavor into it, but there was always a disconnect,” Brown said.

The menu for A Dinner at 29. (CHRIS HUNT FOR THE ATLANTA JOURNAL-CONSTITUTION) 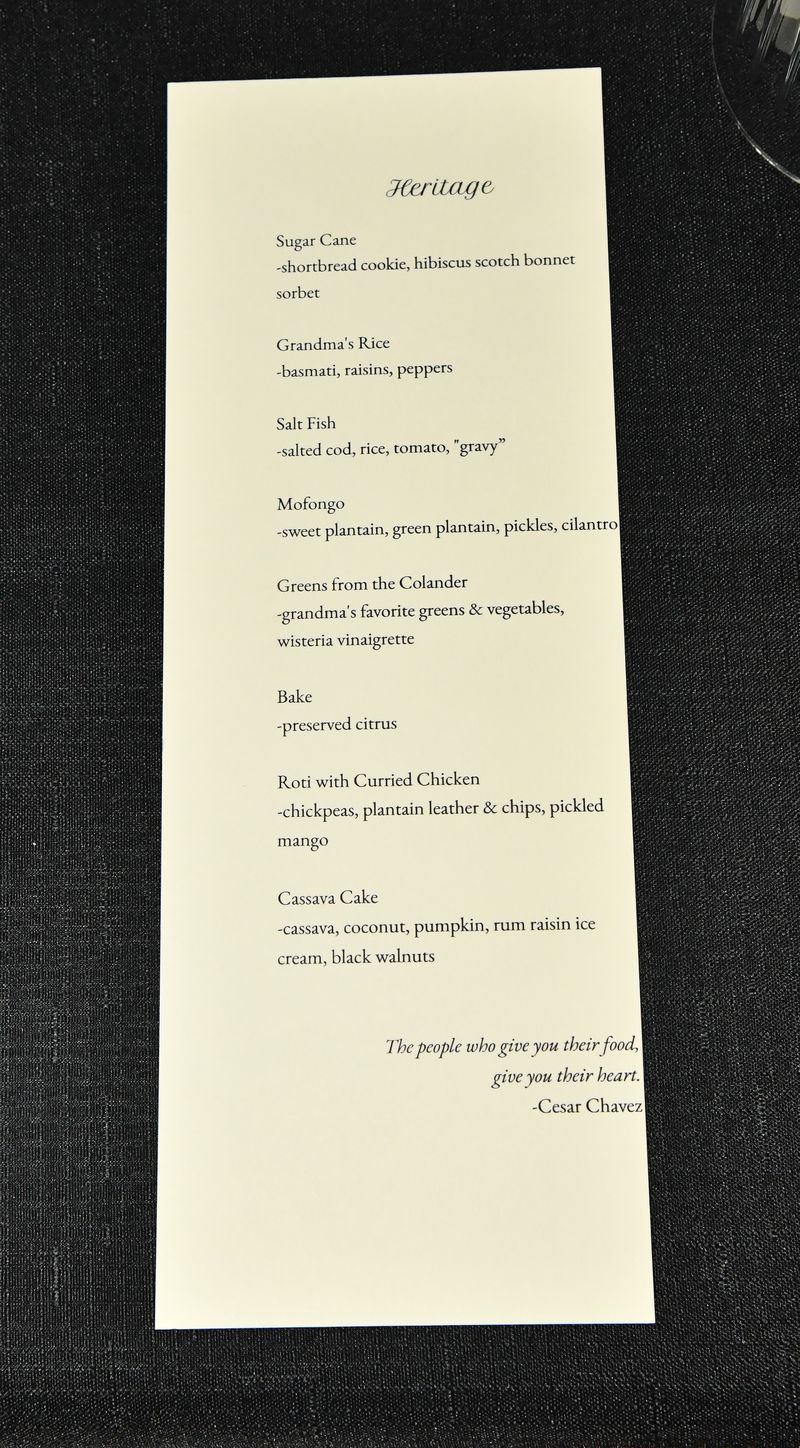 The menu for A Dinner at 29. (CHRIS HUNT FOR THE ATLANTA JOURNAL-CONSTITUTION)

Brown founded the Heritage Supper Club in Atlanta in 2021 as many restaurants struggled to survive the pandemic. When The Pinewood closed, he knew he wanted to focus on the food that was part of his legacy as a young black man of Caribbean descent. But before he could open his own brick and mortar restaurant, he had to show people what he could do with the lessons he learned from his grandmother’s kitchen. Pop-ups seemed to be the answer. Wanting the Heritage Supper Club to maintain an underground, exclusive feel, Brown, like many young chefs now, turned to social media, particularly Instagram, to promote the dinners. As people came and ate, word of mouth followed. It was popular from the start.

Demetrius has hosted nine pop-ups to date, most of them at Condesa Coffee on John Wesley Dobbs Avenue and Southern Belle restaurant. Its mission is to celebrate the food of the black diaspora, particularly those from Africa and the Caribbean. But there are so many cuisines in these countries and across the continent that Brown realized he couldn’t rely solely on what he had learned in the Rhode Island kitchens. He would have to thoroughly research each region he wanted to portray. He would have to test recipes he’d never tried before, including, to his surprise, curries. Johnson & Wales taught him skills and classical technique but did not focus on the culinary history of nations populated primarily by blacks and browns.

“When I’m cooking New American dishes, I can sit down and cook a meal in five minutes,” Brown said. “But we have another dinner called A Trip Up the Nile. All of these countries are similar, but even the dishes they have in common, like stews and casseroles, use different ingredients. That was the challenge. Writing the menu for A Trip Up the Nile literally took two months. There are 11 different countries through which the Nile flows.”

For the 29th pop-up, all he had to do was rely on memory, let alone skill and confidence.

“I always felt like my career wasn’t going the way I wanted it to, but once I got back to who I am, when you gave it your all, you see results,” Brown said.

Heritage Supper Club. For details on upcoming dinners and registration, see Heritagesupperclub.com or @heritage.atl on Instagram.

Sign up for the AJC Food and Dining newsletter