Outer space desperately needs special legal protections similar to those of land, sea and atmosphere to protect its fragile environment, a team of scientists argue. The scientific, economic, and cultural benefits of space should be weighed against the damaging environmental impacts caused by an influx of space debris — some 60 miles above the Earth’s surface — fueled by the rapid growth of so-called mega-satellite constellations.

In an article published April 22 in Nature Astronomy, the authors claim that space is an important environment to preserve on behalf of professional astronomers, amateur stargazers and indigenous peoples.

“We need all hands on deck to address the rapidly changing satellite situation if we can hope to collectively create a future of dark and calm skies for all,” said co-author Meredith Rawls, a research scientist at the Vera C. Rubin Observatory and the University of Washington’s Data Intensive Research in Astrophysics and Cosmology Institute or DiRAC Institute.

The team, led by Andy Lawrence, a professor at Edinburgh University’s Institute of Astronomy, reports that installing large clusters of hardware in Earth orbit — some made up of tens of thousands of satellites to deliver broadband to Earth — is overloading space. In addition, rocket launches pollute the atmosphere, and fragments of broken satellites hurtling through orbit at high speeds threaten functioning satellites on their way. Streaks from satellite flares also cause light pollution, which is increasingly disrupting research.

For example, the Chile-based Rubin Observatory, which plans to conduct a 10-year astrophysical survey, is said to be badly affected.

“The Ruby Observatory will be one of the astronomical facilities most affected by large numbers of bright satellites because of its large mirror and wide field of view — the same qualities that make it such a remarkable engine for discovery,” Rawls said. “I’m very interested in how satellite streaks affect science, but the case for dark and calm skies is much larger.”

Tackling these issues requires a holistic approach that considers the orbital space as part of the environment and is environmentally worthy of both national and international protection, the authors say. They call on policymakers to consider the environmental impact of all aspects of satellite constellations – including their launch, operations and deorbiting – and to work together to create a common, ethical and sustainable approach to space.

“We are at a turning point in history,” Lawrence said. “We can cheaply launch large numbers of satellites and use them for the benefit of life on Earth – but that comes at a price. Not only can the space industry hurt stargazing, it can shoot itself in the foot.” 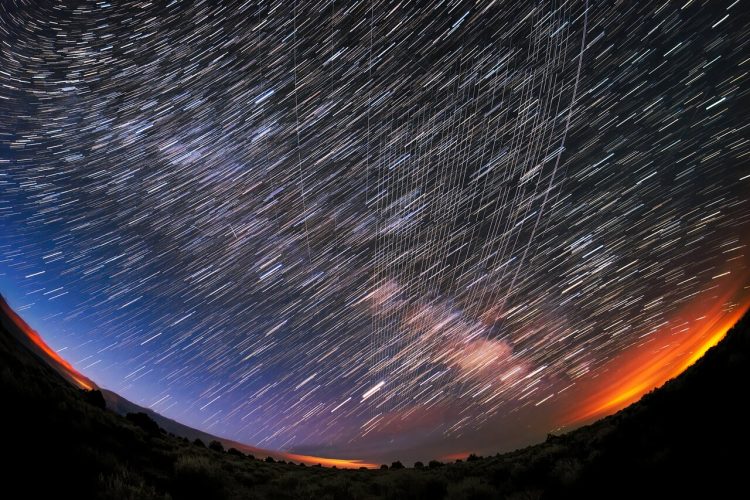 Rawls has also been involved in efforts to protect and preserve the night sky through the recently formed International Astronomical Union Center for the Protection of the Dark and Quiet Skies from Satellite Constellation Interference. The center aims to bring together Sky Observer stakeholders to collaborate on quantifying, mitigating and disseminating satellite impacts.

The new article in Nature Astronomy stems in part from a legal case surrounding how the US government licenses and authorizes commercial space launches. An amicus brief – filed on behalf of Lawrence with input from Rawls and co-author Moriba Jah, associate professor of aerospace engineering and engineering mechanics at the University of Texas at Austin – argues that U.S. environmental regulations govern the licensing of space launches should apply. The case, which could set a precedent in the growing “space environmental protection” campaign, is currently before the US Court of Appeals for the District of Columbia Circuit.

“We believe that all things are connected and that we must take responsibility as if our lives depended on it,” Jah said. “Traditional ecological knowledge is a key to solving this nasty problem.”

Jah recently co-founded the startup Privateer Space alongside Apple co-founder Steve Wozniak and Alex Fielding, CEO of Ripcord. Privateer Space plans a novel approach to accurately map objects in orbit in near real-time to enable the sustainable use of space by a growing number of operators.

“The biggest challenge we face is gaining empathy and compassion for solving these environmental crises,” Jah said. “If we can find innovative ways to allow the general public to empathize with this dire state and take care to take care of it, the earth will gain and all the life that sustains it.”

Additional co-authors on the publication are Aaron Boley, Associate Professor of Physics and Astronomy at the University of British Columbia; Federico Di Vruno, a scientist at the Square Kilometer Array Observatory in the UK; Simon Garrington, Associate Director of the Jodrell Bank Observatory at the University of Manchester; Michael Kramer, Director of the Max Planck Institute for Radio Astronomy in Germany; Samantha Lawler, Assistant Professor of Physics at the University of Regina in Canada; James Lowenthal, Professor of Astronomy at Smith College; Jonathan McDowell, astrophysicist at the Harvard-Smithsonian Center for Astrophysics; and Mark McCaughrean, Senior Advisor at the European Space Agency.

Adapted from a University of Edinburgh press release.