I was once filled with youthful optimism about the power of psychology to solve environmental problems. After all, problems such as climate change, air and water pollution, deforestation and the depletion of natural resources are almost entirely the responsibility of humans. As an expert on the way people feel, think, and behave, I argued that we could use psychology to understand, prevent, and “treat” environmental problems.

Now I’m more pessimistic about the fate of our environment based on what I know about the psychology of pro-environmental attitudes and behaviors. Honestly, the social and psychological forces that drive it derogatory behavior (Behaviour that harms the natural environment) appear far more powerful than the motivating forces environmentally conscious behavior (environmentally friendly behavior).

The gap between environmental awareness and behavior

The gap between concern and behavior is not so mysterious when you consider the many barriers to pro-environmental behavior. These include:

Psychologists have developed antidotes to these barriers. In theory we have many solutions, but in practice we lack the support we need to develop them and implement them on a large scale. 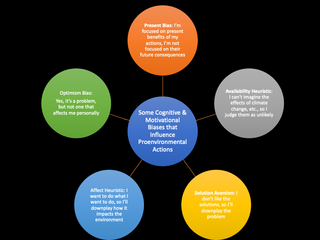 The Problem: The Current Bias (And Other Bias)

Sustainable action requires future-oriented thinking. It’s about playing the “long game” to guarantee your future and the future of the children in your life. But people tend to focus on what’s right in front of them, the “here and now.” You exhibit them bias present and choose the pejorative behavior with its instant rewards over the green behavior with results they can’t see right away. Likewise, they won’t make the change if they don’t like the solution (solution aversion), and if they want to make something bad enough, they ignore the environmental consequences (affect heuristics). Ironically, the rewards of our pejorative behavior are often trivial and short-term (like the convenience of single-use plastics), but we prioritize these minor present-day benefits over long-term cumulative costs and sustainability. 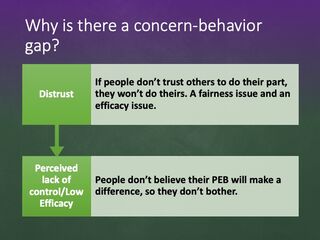 The problem: Perceived lack of control

A perceived lack of control is another common reason for inaction. Environmental problems often result from the cumulative actions of many people, groups and organizations. As a result, individuals often feel that what they are doing is irrelevant, a “drop in the bucket”, and they do not feel responsible. This perceived lack of control and its corollaries of helplessness, passivity, and diffusion of responsibility feed our inaction. 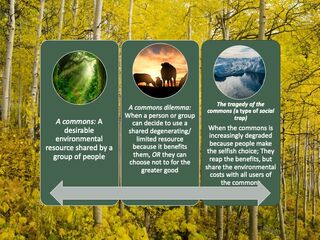 People tend to be selfish and this explains some degrading behavior. Individuals, corporations, groups and/or governments may choose to treat shared environmental resources (Commons) in a way that serves the public interest and ensures sustainability. Conversely, they may choose to behave selfishly and exploit or degrade the commons for short-term benefit. When confronted with it social dilemma, people often choose the latter, more selfish option. They reap all the benefits of their derogatory behavior while the costs are borne by all who share the commons. They also argue that if other Commons users are acting selfishly, they might as well be doing the same. Unfortunately, if many common shareholders act selfishly, the resource is certain to be mined or destroyed (we call this a social trap). 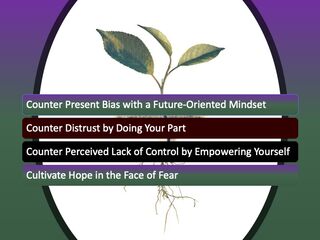 Where is this taking us?

Despite my cynicism, I think we must remain hopeful and nurture the hope of others through our actions. Instead of making trivial excuses, we can educate and empower ourselves to take personal and political action for environmental sustainability (and educate our children).

There are many things individuals can do to reduce environmental problems, including applying bottom-up pressure on business and policymakers. History is full of examples where the cumulative efforts of individuals and groups brought about important changes, even when those in power resisted.

From my point of view, there is definitely no hope for a sustainable future if individuals stop making an effort. Tasting gives us hope and also a clear conscience when dire warnings arrive. When the kids in your life grow up experiencing poor environmental quality, scarcity of resources, and climate change and its wrath, at least you can honestly say you tried, and maybe they won’t blame you for it.